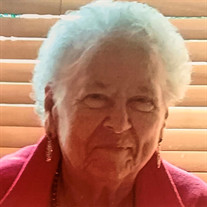 Beverly Mae Freese departed for her heavenly home on Monday, October 7, 2019. There to welcome her home were her parents, Harold and Pauline (Buckles) Freese, her sister and brother-in-law, Doris and Ole Hall, her infant sons, Gary William and Rick Keith, her husbands, William Portlock, Arnold Putnam and Jack Hardt, grandson, Scott Schumacher, sister-in-law, Darlene Krupke Freese and her niece, Lois Hall Comstock. She is survived by her brother, Russell Freese; daughters, Barbara (Don) Portlock Schumacher, Sherry (George) Portlock Siekert and Mary (Russ) Portlock Scott and son, David Portlock. She is further survived by nephews and nieces, including Wayne and Deb Hall and many cherished friends. She was a proud grandmother to 8 grandchildren, their spouses and 16 great-grandchildren. The Freese family came to America from Germany in the late 1800’s and settled in Sharon, Wisconsin. As a girl during World War II, Bev worked for the Red Cross making bandages. She attended Clinton schools until her senior year when the family moved to Sharon. She graduated from Sharon High School in 1950. Bev lived in Wisconsin for most of her life and was active in the community while her children were young. While raising a family, she was active in the Sharon Methodist Church and served as the Sunday School Superintendent, was the President of the Sharon Community School Parent-Teachers Group and served as Den Mother for Cub Scouts. She was active on a bowling league for many years and was a home party representative for Playhouse Toy Company. Bev worked in retail for over 30 years, most notably at Shultz Brothers in Harvard, Dick’s Grocery in South Beloit and Tex’s Grocery in Beloit. She enjoyed the Green Bay Packers, Elvis, Yahtzee, a friendly game of poker and reading. In later life, she was a member of Bethany Lutheran Church. Funeral service will be at 11:00 a.m. on Saturday, October 12, 2019 at Rosman Funeral Home with visitation starting at 10:00 a.m. Private burial at Oakwood Cemetery in Sharon near her parents, grandparents and infant son. In lieu of flowers, donations can be made to Bethany Lutheran Church of Brodhead. www.rosmanfuneralhome.com 364-4477

Beverly Mae Freese departed for her heavenly home on Monday, October 7, 2019. There to welcome her home were her parents, Harold and Pauline (Buckles) Freese, her sister and brother-in-law, Doris and Ole Hall, her infant sons, Gary William... View Obituary & Service Information

The family of Beverly Mae Hardt created this Life Tributes page to make it easy to share your memories.

Beverly Mae Freese departed for her heavenly home on Monday,...

Send flowers to the Hardt family.