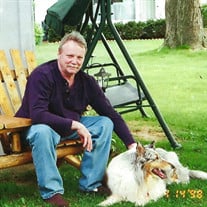 New Richmond, WI/Beloit – Bruce Edward Gabel, age 67 of New Richmond, WI passed away on September 20, 2018 of an abdominal aortic aneurysm. Bruce was born in Beloit, WI to Louis and Charlotte Gabel on March 5, 1951. Bruce met his loving wife, Vicki, 26 years ago in Rockford, IL. Bruce is survived by his wife, Vicki; a son, Brent (Donice); a daughter, Teri (Kevin); two step daughters, Laurie and Kristina; two brothers, Joe and Tom; two sisters, Linda and Chris; several nieces and nephews and grandchildren, Brady, Erin, Cameron, Shawn, Amber, Matthew, Richard, Kedrick, Demetrius, Trina, Kayla, Jordan, Alexis, Justin, Junior and Hailey. He was preceded in death by his parents, Louis and Charlotte Gabel and one brother, Louis Gabel Jr. In lieu of flowers, memorials can be directed to the family. Funeral services will be held at the Rosman Funeral Home, 1125 Cranston Road in Beloit on Thursday, September 27, 2018 at 1:00 PM. A visitation will also be held at the funeral home on Thursday from 11:00 AM until the time of service. Burial will conclude at Floral Lawn Gardens in South Beloit.

The family of Bruce Gabel created this Life Tributes page to make it easy to share your memories.

Send flowers to the Gabel family.