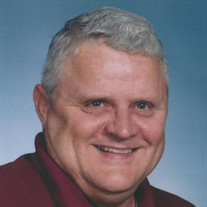 Dale Arthur Beckman, 83, passed away Sunday, May 2, 2021 at Mercy Hospital in Janesville. He was born in Baraboo, WI on May 19, 1937 to Arthur and Vera (Bailey) Meyer. In 1950, he was adopted by Otto and Erma (Smith) Beckman. He graduated from Clinton High School in 1956, and after graduation, joined the Air Force. Dale married Marilyn Mobley on January 9, 1961. She passed away in December 1962. He married Cleo Large on May 29, 1965. She passed away in May 1980. He married Catherine Haugen on May 17, 1981 in Brodhead, WI. Dale retired in 2004 as a union carpenter. He worked in Colorado until 1977 when he moved to Wisconsin. He worked out the Janesville Carpenters Local #836. He enjoyed building houses, schools, bridges and commercial buildings and loved mechanical work. He worked on the Eisenhower Tunnel and Denver Bronco Football Stadium in Colorado, and also the nuclear power plant in Byron, IL. He loved fishing in northern Wisconsin. As a member of the Beloit-West Shore Congregation of Jehovah’s Witnesses, he loved to talk to people about the bible and share the new of God’s Kingdom. (Matthew 24:14) Dale believed in the resurrection of the dead to life on earth in God’s due time. (John 5:28,29) Dale is survived by his wife, Catherine; his children, Teddi (Brad) Woerth, Charai (Stan) Miller, Dale (Namiya) Beckman Jr., Dianna Beckman, Dawn Beckman, Nathaniel (Sonja) Beckman; his grandchildren, Dez, Brooke, Brent, Angel, Benjamin, Caleb, Luke, Demi; one great grandchild, Anthony; his brothers, Ralph (Joyce) Bovee, John (Vivian) Bovee; his sisters, Nina Phippps, Carol Holmbeck, Linda (Elaine) Borgwardt; his half-sisters, Marilyn (Gregg) Zank, Ilene (Bob) Bertrand; his half-brother, Anthony Meyer. He was preceded in death by his parents and by a brother, Roy Kiekhafer. There will be a private graveside service and burial at Rock Township Cemetery in Afton, Wisconsin. Rosman Funeral Home is assisting the family. To express online condolences, please visit: www.rosmanfuneralhome.com. 364-4477

Dale Arthur Beckman, 83, passed away Sunday, May 2, 2021 at Mercy Hospital in Janesville. He was born in Baraboo, WI on May 19, 1937 to Arthur and Vera (Bailey) Meyer. In 1950, he was adopted by Otto and Erma (Smith) Beckman. He graduated... View Obituary & Service Information

The family of Dale A. Beckman created this Life Tributes page to make it easy to share your memories.

Send flowers to the Beckman family.