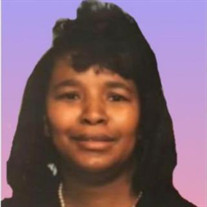 Dorothy R. Porter Jones was born on May 17, 1954 in Oxford, Mississippi, to the union of Henry Murray and Ora Lee Ruffin-Porter. She made her home in Beloit, Wisconsin, where she raised her children and grandchildren. She loved the Lord and accepted Christ as her Lord and Savior and hid His word in her heart. Her favorite saying was "Put God First!" She found extreme joy in helping and caring for others. Her career included various roles in caregiving and the customer service field. Her smile was known to light up any room and she had a heart of Gold. She loved gospel music, studying and spreading the Word of God, sewing, cooking and watching sports on TV. Her favorite sports team was the Chicago Bears. Her favorite song was "God has smiled on me." She was joined in matrimony to Norris Jones and to that union, five children was born Lamond (Nichole) Jones of Beloit, WI, Gregory Jones of Madison, WI, Naurice (Tenika) Jones of Morrisville, NC, Danita LaShellle Jones and Tommie Donnal Jones of Beloit, WI. Dorothy transitioned from labor to reward on April 8, 2021, surrounded by her family. By HIS stripes, she is HEALED! She had four brothers Robert M. (Sammy) Porter and Henry (Lean) Porter, both of Memphis, TN. Willie Porter and James Porter both of York, PA. She had two sisters Mary Jean Gordon of Gary, IN and Sue Francis Wilson of Jacksonville, FL. She has nine grandchildren, Jaelen, Jordyn, GaShayla, LaShari, Ty'Rese, A'livia of Beloit, WI. Cardavion, Nauresha, Naurice (Neko), Jr, of Morrisville, NC. She has three great-grandchildren, Heavyn of Morrisville, NC and Khamari and Baby Ty'La both of Beloit, WI. She was preceded in death by her parents Henry and Ora Lee Ruffin-Porter, her brother Henry Porter, sister Sue Francis Wilson and her son Tommie Donnal Jones. She also leaves to cherish a host of aunts, uncles, nieces, nephews, cousins and extended family and friends who loved her dearly. Funeral service will be at 1:00 p.m. on Thursday, April 15, 2021 at Rosman Funeral Home with visitation starting at 11:00 a.m. Burial in Eastlawn Cemetery. To express online condolences, please visit: www.rosmanfuneralhome.com. 364-4477

Dorothy R. Porter Jones was born on May 17, 1954 in Oxford, Mississippi, to the union of Henry Murray and Ora Lee Ruffin-Porter. She made her home in Beloit, Wisconsin, where she raised her children and grandchildren. She loved the Lord and... View Obituary & Service Information

The family of Dorothy R. Porter Jones created this Life Tributes page to make it easy to share your memories.