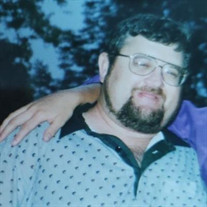 Edward J. Kraemer, 65 found peace on Monday February 1, 2021. Born November 27, 1955, in Madison, he was the son of Delbert E. and Edna M. Kraemer. On May 22, 1993, at Divine Redeemer Lutheran Church in Hartland he married the love of his life, Terry J. Betzhold. Ed was a graduate of Arrowhead High School, Hartland, Wisconsin. He was a veteran of the U.S. Navy, loved fishing, playing cards, spending time with friends, family, his beloved wife, and their dog “Snickers”. He is preceded in death by his father Delbert E. Kraemer, he is survived by his mother Edna Kraemer, brothers, Michael (Debbie) Kraemer, Joseph (J.R.) (Debbie) Kraemer, Larry (Lori) Kraemer, Greg (Jane) Kraemer, his sister Diane (Kevin) Tompkins, and his nephews and nieces. There will be no schedule services at this time. A memorial gathering may be planned for a later date and will be announced.

The family of Edward J. Kraemer created this Life Tributes page to make it easy to share your memories.

Send flowers to the Kraemer family.