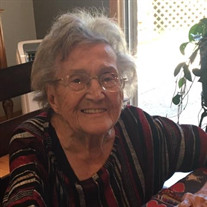 Beloit – Emilene “Mickey” Krueger Aaberg, age 94, passed away on December 6, 2019 at the Rock Haven Nursing Home in Janesville. Emilene was born on August 15, 1925 in Milton Junction, WI, the daughter of Richard and Marie (Clarke) Krueger. Emilene married Jerome Aaberg in Milton Junction, WI on September 21, 1946. Emilene has lived in Beloit since 1954 and worked at Meadow Gold Dairy, Adams Korn Kurls, the Beloit Corp guest house, Beloit Court house as a custodian and as an Avon representative for 30 years. She enjoyed bowling, dancing, knitting, crocheting and painting. She also enjoyed going out for lunch every week with her special niece, Sandy Niemuth for 20 plus years. She is survived by her two children, Elaine (John) Myszewski and Eugene (Barbara) Aaberg; 8 grandchildren, Jerome (Stacy) Myszewski, Thomas (Robin) Aaberg, Chad (Jennifer) Myszewski, Amy (John) Fenrick, Emilee (Brandon) Brooks, Sara (David) Tijerina, Jordan (Kimberly) Aaberg and Andrew (Nichole) Myszewski; 24 great grandchildren and 3 siblings, Dale Krueger, Pauline Swagg and Geraldine (Darrell) Rupnow. She was preceded in death by her parents, her husband, Jerome on June 6, 1982; three siblings, Rosella Church, Edwin Krueger and Walter Krueger and a son in infantcy, Thomas Lee Aaberg. The family would like to extend a special thank you to the staff at Rock Haven and Agrace Hospice Care. In lieu of flowers, memorials can be directed to the family in her memory. Funeral services will take place at the Rosman Funeral Home, 1125 East Cranston Road in Beloit on Friday, December 13, 2019 at 11:00 AM. A visitation will also take place at the funeral home from 10:00 AM until the time of services. Burial will conclude at the Eastlawn Cemetery in Beloit.

The family of Emilene "Mickey" Krueger Aaberg created this Life Tributes page to make it easy to share your memories.