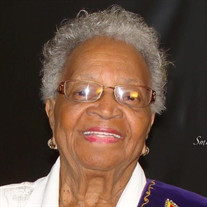 Evelyn S. O’Kelley 98, passed away Sunday, June 28, 2020, in Beloit surrounded by her loving family. She was born on April 2, 1922, in Chattanooga, Tennessee, the only child of Henry and Ethel (Cobb) Stanford. Her parents moved to Beloit when Evelyn was 6 months old. She received her religious training at a young age at the former YMCA of Beloit, which was built for black males who came from the south to work at Fairbanks Morse and Company. She continued her Christian journey at New Zion Baptist Church and Emmanuel Baptist Church. She graduated from Beloit Memorial High School in 1941 and in that same year she married Robert A Johnson, to that union nine children were born. Robert Johnson predeceased her in death in 1966. In 1968, Evelyn met Charles E. O’Kelley and they were married on December 13, 1969. Together they joined Emmanuel Baptist Church where she became an active member serving on the Social Action Committee, Jail, Health and Wellness, and Mission Ministries, Emmanuel Baptist Church Bible Training Institute under the leadership of Dr. Floyd Prude, Jr., served on the Presbytery Self Development of People Committee, and until her death, she served on the Mothers Board. Evelyn was employed at the Beloit Memorial Hospital, Freeman Shoe Company, and retiring in 1987 from Fairbanks and Morse Company. She was a devoted member of Rebecca Chapter No. 4 Order of the Eastern Star for over 50 years, having served as Past Worthy Matron, Secretary, Treasurer, Past Worthy Matron of Zorah Administrative Council #1, Order of the Eastern Star, served as Grand CCFC, Grand Marshall in the East, Deputy Grand Lecturer of Unity Grand Chapter OES for Madison/Beloit, and Past Grand Matron. She is Past Loyal Lady Ruler of Madison/Beloit Assembly #70 Order of the Golden Circle, Secretary and Past State Grand Loyal Lady Ruler of the Wisconsin State Grand Assembly Order of the Golden Circle. She was a past board member of the NAACP having served as membership and fundraising chair, nominating committee chair, executive board secretary, and treasurer. Past board member Blackhawk Technical College, a charter member of the affirmative action advisory committee, past board member and a charter member of Rock County OIC, Past President, of Beloit Inner City Council Board, Past President Women's Culture Club, Past President WI State Association of Colored Women's Clubs and past board member of the YWCA Girl Dynamics. She was honored by the Angel Museum as one of Beloit's Home Town heroes, presented the Martin Luther King UAW Civil Rights Award, NAACP board member of the year award, Mardella Ship (Beloit Inner City Council) award, and OIC board member of the year award. She was an active member of the Greater Beloit Community and served on many boards and committees. She was inducted into the Beloit Memorial High School Hall of Fame (1999), Nominated for the Rock County Hall of Fame, the JC Penny Golden Rule Award and by Judy Robson to serve on the Governor's equal rights council, featured in the Janesville Gazette "Hats off" publication, served as a mediator for the Neighborhood Mediation Center, co-chaired the Leon Peterson Brotherhood Scholarship committee, a poll worker for the Beloit Township, volunteer for Beloit Memorial hospital since 1987, served on the steering committee for the Beloit Town hall meeting, served on the steering committee for the Black Family Summit 1 and 2, participated in the African American Read-In during Black History Month, a member of the Black Star project, was the Beloit Daily news volunteer of the month, Served on the UW extension Juvenile Criminal Justice Board 1979-1981, participated in the AIDS, CROP, and OIC walks was a member of the Volunteer Action Center board where she served as board bank chairperson, African American Infant Mortality Coalition as Historian, the African American Alzheimer and Dementia Advisory Board for Rock County, secretary of Madison/Beloit Assembly, member of the Church Women United, Past President, member of the Church Women United State Board serving as nominating committee chair and formerly as Constitution and By-Laws chairperson, served as an ambassador to the Merrill Community Center, chaperoned Beloit Inner City Council Kids. Second African American to run for the Beloit school board. Believing that 28 days of Black History celebration was not enough she began submitting Black History articles during the year to Chronicle Newspaper. She was a firm believer that “Service to mankind is service to God.” Evelyn was very family-oriented and believed in the power of prayer. She leaves to cherish her memory eight children, Adiyah Hassan, Brandii Dangerfield of Beloit, Afirqah Igbo of Milwaukee, Diallo Sekou of Raleigh NC, Atif Gamal of Denver CO, Charlotte O’Kelley-Pope, Desiree O’Kelley, and Charles O’Kelley all of Chicago, IL. Special niece Alberta Francis, best friend Daisy Smithson, like a son and daughter Walter and Linda Ward of Beloit, twenty-eight grandchildren, forty-three great-grandchildren, twenty-nine great-great-grandchildren, and a host of cousins, nieces, and nephews. She was predeceased by her parents Henry and Ethel (Cobb) Stanford, husbands, Robert Andrew Johnson, and Charles Edward O’ Kelley. daughters, Estrellita, Anita Louise, October Scott (Gloria) one son Yusuf Bin-Rella. Four grandchildren, two great-grandchildren, and one great-great-grandchild. Friends may visit Monday July 6th, 2020 at Rosman Funeral Home at 11 am. The Funeral Service will be at the same location immediately following. Homegoing services to be officiated by The Rev. Rodney Hayes.

Evelyn S. O&#8217;Kelley 98, passed away Sunday, June 28, 2020, in Beloit surrounded by her loving family. She was born on April 2, 1922, in Chattanooga, Tennessee, the only child of Henry and Ethel (Cobb) Stanford. Her parents moved to Beloit... View Obituary & Service Information

The family of Evelyn S. O'Kelley created this Life Tributes page to make it easy to share your memories.

Send flowers to the O'Kelley family.