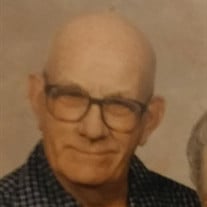 It is with great sadness that the family of Furman Robert Mills announces his passing after a brief illness on Thursday, January 10th at the age of 87 years. Furman was known to be an avid Chicago Bears and St. Louis Cardinals fan. He loved fishing, working in the yard, and listening to classic country songs sang by Waylon Jennings, George Jones, and Hank Williams, Sr. However, he seemed to keep quiet about the important things, like his work ethic and loyalty to his family, community, and country. He was born in Catlin, IL and first began working when he was a boy digging graves with his father, so he could give his earnings to his mother. Through school, he met his surviving wife, Helen, and they married when she was 17 years old and he was 19 years old. He went to join the Army and served his country from 1953-1955 while being stationed in Washington. He then returned to Catlin, working hard as a workman on the Wabash railroad. When his time ended there, he joined the police force and later became the Chief of Police for the Catlin Police Department. Finally, word came from an old Army friend living in South Beloit, IL who told Furman it would be a good move for him and his family. Furman and the family did just that, and he finished his working career at South Beloit School District as a bus driver and janitor. He thoroughly enjoyed those jobs and being able to interact with the children every day. Furman will be lovingly remembered by his wife of 68 years, Helen, his children, Donna, Brenda (Max), and Michael, his grandchildren, Larry Gene, Jimmy (Angelina), Teresa, Teri, Liane, 7 great-grandchildren, and 4 great-great-grandchildren. He was predeceased by his mother and father, Nora and Charles, his siblings, Emanuel, Silvia, Harland, Richard, Claude, Garnet, Charles (Chas), who are sure to have greeted him with open arms at the gates of Heaven. A visitation in memory of Furman will be held on Tuesday, January 15th, at 11:00 a.m., at Rosman Uehling Kinzer Funeral Home, 1125 Cranston Rd, Beloit, with Brother Larry Wofford Sr. officiating. Funeral services will start at 12:00 p.m. at the same location. Interment with military honors will follow in the family plot at Floral Lawns Cemetery located at 835 Dearborn Ave in South Beloit. A luncheon for family and friends will be provided at the Church of Christ at 241 S Hackett, South Beloit, IL. In lieu of flowers, those who so desire may make memorial donations in memory of Furman to the Church of Christ at 241 S Hackett, South Beloit, IL.

It is with great sadness that the family of Furman Robert Mills announces his passing after a brief illness on Thursday, January 10th at the age of 87 years. Furman was known to be an avid Chicago Bears and St. Louis Cardinals fan. He loved... View Obituary & Service Information

The family of Furman Robert Mills created this Life Tributes page to make it easy to share your memories.

It is with great sadness that the family of Furman Robert Mills...

Send flowers to the Mills family.