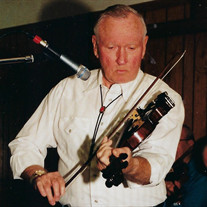 Beloit – Harlyn Everett Erickson, age 85, passed away on October 29, 2018 while at Azura Memory Care in Beloit. Harlyn was born on March 10, 1933 in Lisbon, North Dakota the son of Oscar “Pat” and Crystal (Seelig) Erickson. He grew up in his hometown, McLeod, ND. Harlyn served his country in the U. S Army during the Korean war between 1954 -1956. Harlyn married his wife, Flora Holloway on May 27, 1961 in Rockford and she preceded him in death in 2012. He later worked as a millwright for GM for over 34 ½ years before his retirement in 1992. He was a member of UAW Local 95 and a member of the Beloit Eagles Club. Harlyn is survived by his five children, Terry (Debbie) Erickson, Gary Erickson, Danny (Angie) Erickson, Donna Rasmussen and Dorothy (Randy) Nichwander; 9 grandchildren, 8 great grandchildren and 1 great great grandchild. Harlyn was preceded in death by his parents, two brothers, Royce “Lavern” and Donald, his wife, Flora in 2012 and a son, Jack Papazian Jr. In lieu of flowers, memorials can be directed in his memory to the Alzheimers and Dementia Alliance of Wisconsin, 3330 University Ave., Suite 300, Madison, WI 53705. The family would like to extend a special thank you to the staff at Azura Memory Care for all the care they gave to Harlyn. Private family services will be held at a later date.

The family of Harlyn Everett Erickson created this Life Tributes page to make it easy to share your memories.

Send flowers to the Erickson family.