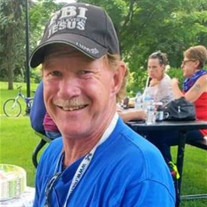 Beloit – James (Jimmy) Hayden, age 58 of Beloit WI, passed away on December 7, 2018 in his home of natural causes related to a heart attack. He was born on April 20, 1960 in Beloit, the son of Russell and Frances (Casey) Hayden. A lifelong resident of Beloit, he attended Beloit High School. He married Sandra Martineau in Beloit. She preceded him in death on July 13, 1988. He later married Tami Dolgner; the mother of his two children Selena and Garrett Hayden. Jimmy was previously employed by Taylor Freezer and General Motors. He also worked many other odd jobs during his lifetime. Jimmy enjoyed the outdoors, fishing, picnics, playing cards and making many new friends. Jimmy loved watching old movies and Los Angeles Rams play football especially when they beat the Green Bay Packers. Everyone who met him never forgets his passion for helping others and his kindness. His great ability to socialize with anyone gave him the gift to make great friends which also became part of his extended family. Jimmy is survived by his daughter, Selena Hayden, his son Garrett Hayden and his granddaughter. He is also survived by his siblings; his two brothers, Russell (Kathy) Hayden, Philip (Jodi) Hayden, his sister, Barbara Hayden, his extended family and close friends, Karen Hayden, Dottie Hayden, Jeff, Marvin and Mark and his many nieces and nephews. He was preceded in death by his parents, Russell and Frances Hayden, his brother Theodore, his sister Adela on October 29, 2018, his paternal grandparents Earl (Pearl) Hayden and maternal grandparents, Sebastian (Adela) Frye. A Memorial visitation will be held at the Rosman Funeral Home, 1125 Cranston Road in Beloit on Friday, December 14, 2018 from 1:00 PM to 3:00 PM. Cremation rites will be accorded, and a private burial will be held at a later date.

Beloit &#8211; James (Jimmy) Hayden, age 58 of Beloit WI, passed away on December 7, 2018 in his home of natural causes related to a heart attack. He was born on April 20, 1960 in Beloit, the son of Russell and Frances (Casey) Hayden. A lifelong... View Obituary & Service Information

The family of James "Jimmy" Hayden created this Life Tributes page to make it easy to share your memories.

Send flowers to the Hayden family.