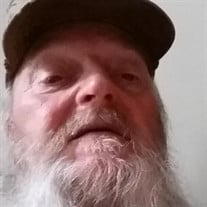 James Lewis Urbin was born in Sedwick County, Kansas on February 29, 1948 and died on September 16, 2018. James married Marianne Eddy on October 31, 1970 and graduated from Beloit Memorial High School. He worked at Hanson Pipe (formerly Price Brothers, Interpace Corp, & Several other names over the years) in South Beloit, IL as a welder, forklift driver, and many other job titles for 50+ years until he retired in 2013. Enjoyed hunting, fishing, and nature in general. James loved all kinds of sports, football, baseball, basketball, NASCAR. Packers, Brewers, Bucks, Badgers. Pretty much if it was any kind of sport he would watch it! He is survived by his wife, Marianne Urbin; his daughter, Jeanna Urbin; two grandsons, Kirt Hoffman-Urbin and Kody Urbin; a granddaughter, Bobbie Jo Padgett; three brothers, Richard Urbin, Wayne Urbin, and Tony Urbin; a sister, Phyllis Scott and four Great Grandchildren. He was preceded in death by his Parents, Rose Urbin, James (Jack) Urbin and his, step-mother, Doreen Urbin. Per James wishes, he will be cremated with assistance provided by Rosman Funeral Home and Cremation Services. There will be an informal celebration of life that will take place at a later date. Please watch for updates on the Rosman Funeral Home website.

The family of James Lewis Urbin created this Life Tributes page to make it easy to share your memories.

Send flowers to the Urbin family.