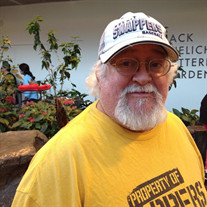 James D. Visgar, age 63, Janesville, passed away Monday, October 22, 2018 at St. Luke’s Hospital in Milwaukee after suffering a stroke. He was born in Beloit, WI on November 12, 1954, the son of Everett and Dorothy (Pierce) Visgar. He graduated from Beloit Memorial High School in 1972. He married Cindy Comstock in 1974. They were divorced in 2011, after having raised three daughters. He was employed by General Motors from 1976 to 2006. Jim was an avid sports fan and participated in numerous sports leagues, including golf, bowling, pool, and softball leagues. He coached Girl Scout softball teams for his daughters, played on men’s softball leagues and on co-ed softball leagues with his daughters. Jim was also a collector of sports memorabilia often spending hours standing in line to collect autographs from all sorts of sports figures. He was a long time season ticket holder of the Beloit Snappers, rarely missing a home game. On game day, he would arrive at least an hour early to get a chance to collect autographs on cards, balls, bats and pictures of the team. Friends and relatives knew exactly where to find him when they arrived at the ball park as he always sat in the same seat. More than his love for sports was his love for his daughters and grandchildren. After retirement, he often served as “grandpa daycare and chauffeur service” and seldom missed school, dance, or sporting events. He was a large part of the daily lives of his daughters and grandchildren, and he will be greatly missed. Jim is survived by three daughters and five grandchildren, all of Janesville. Jennifer (Ted) Wenzel and her daughter, Samantha; Brianne (Charlie) Allbee and her children, Emily and Nicholas; Danielle (Josh Jensen) Visgar and her children, Andrea and Zach. Also surviving is a brother, Dan Visgar of Bradenton, FL. He was preceded in death by his parents; a brother, Laverne Bean and a sister, JoAnn Steinmetz. A gathering will be held in his honor on Saturday, November 10, 2018 from 3:30 to 7:00 p.m. at the UAW Union Hall in Janesville. A private burial will be at a later date. “Every little girl should have the privilege of believing their father is perfect. Thank you for giving our daughters that gift.”

The family of James Dale Visgar created this Life Tributes page to make it easy to share your memories.

Send flowers to the Visgar family.