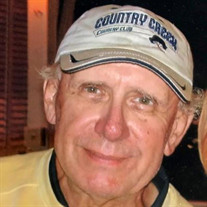 Jerry Edward Gunning, 81, of Fort Myers, FL, formerly of Beloit, WI, lost his battle with cancer with his son by his side on February 13, 2022. Jerry entered this world on November 11, 1940, in Beloit, WI, thanks to his parents, Lester and Lucille (Lankford) Gunning. He was baptized by Pastor Halvorson on March 22, 1942. As a young man in high school, Jerry was a cook at the famous teenage hangout, Beloit Pop House. Like so many of his friends, this was a huge part of his younger life. After Jerry graduated from Beloit Memorial High School in 1959, he went on to study art. He worked in the printing business until starting his own business in 1973, The Villager Gallery. He sold it in 2005 and retired to Florida. He was a long standing member of the Beloit Downtown Council. He loved Beloit and always promoted the town. Jerry married his high school sweetheart, Geraldine Kennedy, Feb 4, 1961. They had two children, Jeff Gunning (Angie Hong) of Fort Myers, FL and Laura Drath (Keary), of Ogdensburg, WI. Jerry lost the love of his life to cancer in 1992. In 1998 he married Sandra Wolf. Jerry filled his free time with adventure, racing sports cars at Blackhawk Farms Raceway in Roscoe, IL, as well as other midwest tracks. After 20 years, he went from racing cars to pleasure cruising sailboats on Lake Michigan. Golfing has always been a part of his life, starting as a young boy biking to the municipal course in Beloit and playing numerous rounds there. He was known for having a natural, smooth swing. He became a member of the Beloit Country Club in the late 80’s until his move to Florida in 2005. He won several club championships in his age group. His passion for the game continued, and being retired, he played even more. He competitively participated in tournaments and leagues until last fall, and looked forward to his Sunday morning league play. He loved working at the Country Creek Golf Club in Estero, FL. It was his perfect place to work - when he wasn’t working, he was golfing. Jerry is preceded in death by his parents, first wife, Geraldine, second wife, Sandra in 2019, his brother-in-law Jack Kennedy and sister-in-law, Connie Gunning. Besides his children, Jeff and Laura, Jerry is also survived by his five grandchildren: Allison, Amanda, Leah, Connor and Parker, and two great-grandchildren, Jordan and Luca; his brother, Tom Gunning, sister-in-law, Jan Kennedy, nieces and nephews, as well as his golfing buddies and life time friends. Jerry lived a very full life. Hopefully he is playing his perfect golf game on the most beautiful course enjoying his favorite cigar. Memorial service will be at noon on Friday, June 10, 2022 at Rosman Funeral Home, with visitation starting at 11:00 a.m. Interment at Eastlawn Cemetery. To extend online condolence, please visit: www.rosmanfuneralhome.com. 364-4477

Jerry Edward Gunning, 81, of Fort Myers, FL, formerly of Beloit, WI, lost his battle with cancer with his son by his side on February 13, 2022. Jerry entered this world on November 11, 1940, in Beloit, WI, thanks to his parents, Lester and... View Obituary & Service Information

The family of Jerry Edward Gunning created this Life Tributes page to make it easy to share your memories.

Send flowers to the Gunning family.