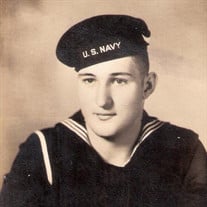 Brodhead/Juda – Lawrence Richard Harding Sr., age 92 passed away December 19, 2020 at the Janesville Mercy Hospital. Lawrence was born on September 19, 1928 in Rockford, IL, the son of Thomas and Ethel (Willis) Harding. Lawrence married Delores Serns in May of 1950. Lawrence and Delores moved and have been farming in the Brodhead area since March 1, 1955. Lawrence was part owner of the Golden Rod Creamery in the 1950’s and 1960’s and later was involved with Swiss Valley Milk Company until 1971. Lawrence was an avid roller skater and even participated in many choreographic shows and plays on roller skates. He was a member of the Footville American Legion Post 237 until his death and served during both WWII and was called back into action during the Korean War in the US Navy aboard the USS Young DD580 Destroyer. His ship made 7 safe trips across the Atlantic Ocean before his discharge. Lawrence was also known to make and eat his own popcorn and always gave it out to family and friends. He was also fond of Delores’s paintings of Bluebirds prior to her passing, as they always had Bluebird feeders at their home. The family would like to thank the staff at Cosy Lil Acre Assisting Living Center in Janesville that provided to Lawrence over the past 4 years and also to the doctors and nurses at Janesville Mercy Hospital. Lawrence is survived by his 3 children, Floyd Harding, Lawrence “Rick” (Kathy LaBarre) Harding and Cheryl Easland; 14 grandchildren and many great grandchildren and great great grandchildren. Lawrence was preceded in death by his parents, his wife Delores in 2014, a son, Robert Harding in 2012, a grandson, Christopher Harding in 2014 and three siblings, Thomas Harding, Dorothy Grahm and Lorraine Kempen. In lieu of flowers, cards can be set in his memory to the DL Newcomer Funeral Home, PO Box 26 in Brodhead WI 53520. Memorials will be directed to the Footville American Legion Post 237 per Lawrence’s wishes. Private burial services will be held at a later date due to Covid-19 restrictions. The DL Newcomer Funeral Home in Brodhead is assisting the family. www.dlnewcomerfuneralhome.com 608-897-2484

The family of Lawrence Richard Harding created this Life Tributes page to make it easy to share your memories.

Send flowers to the Harding family.