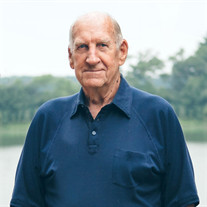 Milton – (formerly of Beloit) Leroy M. Saari, age 88, passed away on May 14, 2019 at Janesville Mercy Hospital. Leroy was born on August 31, 1930 in Brantwood, WI, the son of Frank and Laina Saari. He married his wife, Delores on October 10, 1952 in Minnesota. Leroy served in the U.S. Army during the Korean War. He enjoyed reading, fishing and for many years traveling the US with his wife. He retired from the Public works department for the City of Beloit after 20 plus years of service. Leroy is survived by his 6 children, Michael Saari of Beloit, William Saari of South Beloit, Richard (Susan) Saari of South Beloit, Barbara (Jeff) Winokur of New York, Patricia (Brad) Campbell of Beloit and Ronald (Tara) Saari of Janesville; 17 grandchildren; 23 great grandchildren; a sister, June Johnson of Merrill, WI and many nieces nephews and other relatives. Leroy was preceded in death by his parents, his wife Delores on April 14, 2002; one brother, Norman; two sisters, Agnes and Darlene and one granddaughter, Stephanie Saari in 1982. In lieu of flowers, memorials can be directed to the family. Funeral services will be held at the Rosman Funeral Home, 1125 Cranston Road in Beloit on Tuesday, May 21, 2019 at 11:00 AM. A visitation will also be held at the funeral home on Tuesday from 10:00 AM until the time of services. Burial will conclude at the Eastlawn Cemetery.

The family of Leroy M. Saari created this Life Tributes page to make it easy to share your memories.

Send flowers to the Saari family.