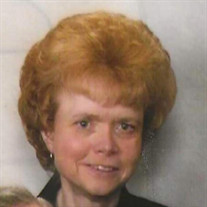 Linda S. Loomis, 71, of Beloit passed away Sunday, February 20, 2022. Linda was born during a wintery storm on December 27, 1950, to Warren and Eleanor Petitt she was raised in Clinton and graduated from Clinton High School in 1968. Despite coming in during a storm she always remained a soft-spoken gentle soul. She married Ronald Loomis on April 14, 1973 and made their home in Beloit where they raised their 2 sons. Matthew and Christopher were truly her pride and joy. She loved them dearly even though she would joke that if Christopher would’ve been born first there never would’ve been a second. Linda worked at Freeman Shoes for multiple years until their closure. She then went to work for Swiss Tech in the shipping department until her early retirement, wishing to travel and care for Ron after his Parkinson's diagnosis. Though she never became a “Grandma” she was always a “Grandma” figure to Jenna, TJ, Kendell, Delaney, Taitum, Kaylynn, Olivia and her special little helper and storyteller, Ty. Linda was predeceased by her parents, grandparents, and father and mother in-law, Carl and Marian Loomis, her Uncles Russ Petitt and Ed Girdler and Aunts Evelyn Girdler and Florence Jensen. She is survived by her husband, Ron; sons, Matthew (Claudia Solis) and Christopher Loomis; her sister, Debbie (Doug) Armfield, and her sister/best friend and confidante Connie (Lynn) Tracy. Other survivors include multiple in-laws, numerous nieces, nephews, and cousins, her Aunt Marion Wyse and so many friends. Funeral service will be at 1:00 p.m. on Monday, February 28, 2022 at Rosman Funeral Home, with visitation starting at noon. Interment will take place at Floral Lawn Cemetery, South Beloit at a later date. To express online condolences, please visit: www.rosmanfuneralhome.com 364-4477

Linda S. Loomis, 71, of Beloit passed away Sunday, February 20, 2022. Linda was born during a wintery storm on December 27, 1950, to Warren and Eleanor Petitt she was raised in Clinton and graduated from Clinton High School in 1968. Despite... View Obituary & Service Information

The family of Linda S. Loomis created this Life Tributes page to make it easy to share your memories.

Send flowers to the Loomis family.