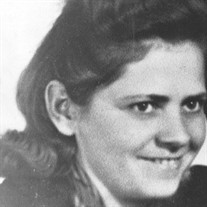 Beloit - Maria Mekschun, 94, passed away February 6, 2020. Born February 17, 1925 in Kamenets Podolsk Ukraine to Fedor and Katherin Marniak. After the Germans invaded the Soviet Union in 1941, Maria was forcibly sent to Germany as slave labor at the age of 16 where she worked as a farm laborer until the war ended. As a displaced person, she entered a Displaced Person Camp (DP) in Trier, Germany where she met Anton Mekschun, also a DP from Ukraine. They married and two children were born, Adam and Lydia. Upon meeting the requirements to immigrate to the US, the family was sponsored by the First Baptist Church of Beloit Wisconsin arriving in January of 1952. The family settled in Beloit Wisconsin and a third child, Valentina was born. Anton worked for Fairbanks Morse until his retirement in 1977. Maria was employed at Freeman Shoe Company, retiring in 1987. Maria enjoyed traveling back to the Ukraine many times over the years, the first time in 1985 where she reunited with her five siblings who remarkably survived the war and its aftermath. She enjoyed gardening and hosting family gatherings. Maria is survived by three children, Adam (Cheryl) Mekschun, Lydia (Gail) Sieren, Valentina (Dave) Annis. Grandchildren, Matthew (Lorna Moser) Mekschun, Anne (James Stewart) Mekschun, Jamie (Ally) Sieren, Dennis (Mary Jo) Sieren, Tonya (Adam) Miller, Cortney (Russell) Herrington, and 12 great grandchildren. Maria was predeceased by her parents, husband Anton (1981), Sisters Shura, Valentina, Tasha, Zhenya and brother Ivan all of Ukraine. In lieu of flowers, memorials can be directed to the family in her memory. The family would like to thank the Beloit Regional Hospice team that cared for our mother towards the end of life, and Maria’s caregiver; Teresa. Funeral services will be held at the Rosman Funeral Home, 1125 E. Cranston Road in Beloit on Tuesday, February 11, 2020 at 11:00 AM. A visitation will also take place at the funeral home from 10:00 AM until the time of funeral service. Burial will conclude at the Eastlawn Cemetery in Beloit. www.rosmanfuneralhome.com 608-364-4477

The family of Maria Mekschun created this Life Tributes page to make it easy to share your memories.

Send flowers to the Mekschun family.