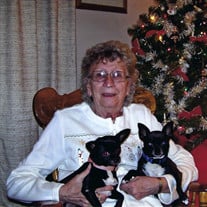 South Beloit, IL – Maxine Myher, age 86, died on August 29, 2018 while at her home. Maxine was born on December 16, 1931 in Evansville, WI the daughter of Leslie and Dorothy (Hartin) Pratt. She married Albin Myher on April 11, 1959 in Janesville. Maxine graduated South Beloit High School and later from MATC Madison Nursing School and worked as a nurse for over 20 years at Carvilla. Maxine enjoyed tending to her garden, wood working and crafts around the house and power shopping with her daughter. But most of all she enjoyed spending time with her family and friends and her two dogs, Peanut and Buddy. Maxine is survived by four children, Gary Brockman of Janesville, Allen Myher of South Beloit, Terry Myher of South Beloit and Althea (Tom) Thiede of South Beloit; 7 grandchildren, 13 great grandchildren; a sister, Betty Mae Sympson; her best friends, Shirley Niles and Dorothy Weaver and several nieces, nephews and other relatives. Maxine was preceded in death by her parents, Leslie and Dorothy Pratt, her husband, Albin on February 10, 1996; a grandson, Brad Brockman; a brother-in-law, Clyde Sympson and two nephews, Bob and Bill Sympson. In lieu of flowers, memorials can be directed to Beloit Regional Hospice in her memory. Funeral services will be held at the Rosman Funeral Home, 1125 Cranston Road in Beloit on Wednesday, September 5, 2018 at 12 PM Noon. A visitation will also be held at the funeral home on Tuesday, September 4, 2018 from 4:00 PM to 6:00 PM and also on Wednesday at the funeral home from 11:00 AM until the time of services. Burial will conclude at Floral Lawn Memorial Gardens in South Beloit. The Myher family would like to extend a special thank you to Dr. Elezi and Beloit Regional Hospice for the special care they gave to Maxine when she needed it the most. You are amazing people and we were lucky to have you care for mom.

The family of Maxine D. Myher created this Life Tributes page to make it easy to share your memories.

Send flowers to the Myher family.