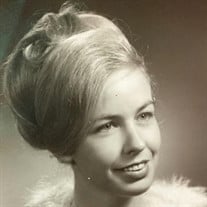 Mieke Geertruida Maria Veneman Passed away on May 4th 2021 in her home with her family by her side, she is survived by her (brother) Ben her (son) Richard Veneman (Julie) of Beloit WI, (daughter) Joy Veneman of Beloit WI & (son) Paul Veneman of Wales WI, (grandkids) Haley (Cory), Michael, Josh & soon to arrive Isaac Edward (great grandkids) Kira, Bella & CJ, she also left behind Nieces, Nephews & In-Laws. She is predeceased in death by her Parents (mother) Maria Nolte (father) Arnoldus Nolte (sister) Truus, (brother) Gerrit & (brother) Ary all from the Netherlands, her (son) Jeff Veneman, and (husband) Edward Veneman. Mieke married the love of her life on 7/28/1965 in the Netherlands, she immigrated to the U.S.A with her family on 11/7/1967, she worked as a Nurse in Holland and continued in the medical field at Swedish American Hospital, she also worked as a Teacher at Beloit Open Bible Academy and as a Med Tech at Premier Care Nursing Home. She loved the United States she called home and became a U.S. Citizen on 5/19/1999, she was also fondly known as the Yellow Ribbon Lady, she would hang yellow ribbons on as many trees, telephone poles & car antennas as she could to support our troops during the Desert Storm Campaign, the military always had a special place in her heart and she shared that by hanging yellow ribbons. Her love for her family, Country & God was well known. She always preached to people every chance she got and spread the word to as many people as she could, she would always say Jesus Loves You and so do I. Mom we will miss you dearly and we hope when you check in on us from time to time that you will smile and know as a loving mother we will cherish your words of wisdom and the word of God that you & dad instilled in us, I hope looking at the face of God was everything you expected and more we can only imagine what that must be like, we send you off with this, you were the best mom in the whole world and we Loved your heart out. Love Rich, Joy & Paul Burial at Eastlawn Cemetery at a later date to be announced.

Mieke Geertruida Maria Veneman Passed away on May 4th 2021 in her home with her family by her side, she is survived by her (brother) Ben her (son) Richard Veneman (Julie) of Beloit WI, (daughter) Joy Veneman of Beloit WI & (son) Paul Veneman... View Obituary & Service Information

The family of Mieke Veneman created this Life Tributes page to make it easy to share your memories.

Mieke Geertruida Maria Veneman Passed away on May 4th 2021 in...

Send flowers to the Veneman family.