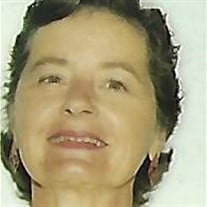 Myrtle L. Seidel Haas Foster, 91, recently of Wisconsin Rapids passed away peacefully on Thursday, January 2, 2020. Myrtle was born September 24, 1928, in East Chicago, Indiana, the daughter of Edward Nathan and Myrtle Ivy Caroline (Wiese) Seidel. Myrtle married Bernard Haas in May 1948 in Beaver Dam. He preceded her in death on November 26, 1959. She married Rev. Lloyd P. Foster in January 1962; he preceded her in death on September 9, 2012. The two large families blended 11 children and moved to Wis. Rapids. Together Myrtle and Lloyd had a son. During their 50+ year marriage, Myrtle and Lloyd also lived in Beloit, Wausau, Greenbush and Janesville, Wisconsin. Throughout their marriage, Myrtle and Lloyd passionately enjoyed camping with family and friends. Myrtle was actively involved in the United Methodist Women all of her adult life, including serving as the District President for several years. She was also a member of the church choir and PEO. Along with Lloyd, Myrtle was involved in collecting marbles for 30+ years. She was affectionately known as the “Cookie Lady” to many students near their retirement home in Janesville. She is survived by her children: Dave (Mary) Haas, Bill (Mary) Haas, Deb (Nol) Van Est, LuAnn (Dennis) Slattery, Naomi Wiltzius and John (Janet) Foster; stepchildren: Fred (Sherry) Foster, Lloyd L. (Kay) Foster, Bob (Letty) Foster and Patricia Foster; daughter-in-law, Pam Haas as well as 25 grandchildren, many great-grandchildren and great-great grandchildren. Myrtle was preceded in death by her son, Daniel Haas, stepson, Arthur Foster and his wife, Wanda. Services will be held at a later date. In lieu of flowers, memorials may be made to the River of Life United Methodist Church, 2375 Prairie Avenue, Beloit, WI 53511, and designated for United Methodist Women or the church choir or children’s ministries. Memorials may also be sent to Janesville Rotary Gardens. Rosman Funeral Home, 1125 Cranston Road, Beloit 53511, assisted the family. To express online condolences, please visit: www.rosmanfuneralhome.com. 608-364-4477

The family of Myrtle L. Foster created this Life Tributes page to make it easy to share your memories.

Send flowers to the Foster family.