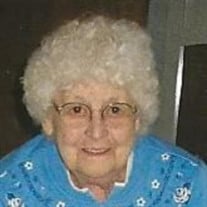 Noriene May Rector, 89 of Beloit, passed away at Evansville Manor, Evansville WI on Friday, March 27, 2020. She was born in Beloit on 7 June 1930 to Fred C. and Ella (Haefer) Voss, the last of 6 children. The depression era meant many moves for her family, having left the Sauk Co. WI area to find work. Noriene graduated at age 17 from Clinton High School in 1947. Her career in the working world began with the position of head of the catalog division at the Sears and Roebuck Store in Beloit on State St. While working there, she met and married Maurice Joseph Rector on 13 Feb. 1955 at West Side Presbyterian Church, Beloit. “Joe” was the Sears regional display manager from Muncie, Indiana, which then became their home. They were later divorced in 1977. Noriene returned to Beloit in 1978, with employment at Freeman Shoe, until the company went out of business. She had taken on the responsibility of her brother Henry’s daughter, Lois Ann Voss in 1975. Lois had suffered spinal meningitis twice in her life – once when she was 6 months old and once again in 1948 at the age of one year. She was left with disabilities on her right side. As Lois’s guardian and caretaker, she became known as “DeeDee” by Lois. They were inseparable until 1999, when Lois required more physical help and care and went into a group home. Lois made quite a few friends in her new surroundings but passed away on Aug. 4, 2017 at the age of 70. They were quite a pair – what one didn’t think of – the other did. There could not have been a better choice than Noriene to be the best person as “2nd” mom to Lois. Above all else, Noriene was “do things by the same routine” kind of person; with meticulous detail to each task she undertook. She made sure she always looked her best when leaving the house. Not liking the way her name was spelled on her birth certificate – she added the I in Norene to make it Noriene, thinking that was a much better spelling. Noriene is survived by nieces Judith Haime Nichols and her family, Esther Voss Ames and her family; nephews Richard Haime and his family and Alvin “Mike” (Bonnie) Voss. She is further survived by great-nieces and nephews; cousins and friends. Noriene was preceded in death by her parents Fred and Ella Voss, brothers, Henry (Shirley) Voss, Richard Voss, Victor (Martha) Voss, and Lee Voss; sister, Vivian Voss (Robert) Haime. There will be no services with private burial at Milton Lawns, Janesville WI. Cards of condolence can be sent to J. Nichols, 1426 Hackett St. Beloit WI 53511. Memorials can be sent and/or will be given to Community Connections, Inc., 2200 W. Court Street, Janesville WI 53548 “In memory of Lois Voss and Noriene Rector.” Rosman Funeral Home assisted the family.

Noriene May Rector, 89 of Beloit, passed away at Evansville Manor, Evansville WI on Friday, March 27, 2020. She was born in Beloit on 7 June 1930 to Fred C. and Ella (Haefer) Voss, the last of 6 children. The depression era meant many moves... View Obituary & Service Information

The family of Noriene May Rector created this Life Tributes page to make it easy to share your memories.

Noriene May Rector, 89 of Beloit, passed away at Evansville Manor,...

Send flowers to the Rector family.