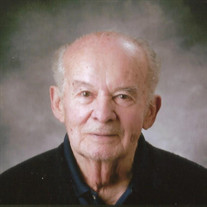 Ralph Alba, age 90, of Beloit, WI, died on Sunday, November 1, 2020, at Azura Memory Care. Ralph was born on August 27, 1930, in Caledonia, IL, the son of Refugio and Soledad (Reyes) Alba. He grew up in Beloit, WI, and graduated from Beloit High School. Ralph worked at Fairbanks Morse in Beloit after high school, and later retired from there. He loved this country and was proud to be a United States Army veteran. He served during the Korean War, bravely fighting in the infantry on the front lines, and earned many medals by doing so. Ralph enjoyed boxing, reading, hunting, fishing and spend time reminiscing about his adventures. Ralph was a kind, caring man and was always helping others throughout his life. He was a member of Faith Baptist Church in Beloit and the Mexican Baptist Church in Rockford. He had a strong faith in God. He is survived by a sister, Connie Alba, of Beloit, and two brothers, Donald (Carol) Alba, of Marengo, Iowa, and Joe (Nancy) Alba, of Beloit, many nieces and nephews and many great nieces and nephews. He was preceded in death by his parents, sisters Lou Alba, Carmen Bratton, Margaret Perkins, and Betty Wallace. A remembrance service is being planned for a future time. Memorials can be made in Ralph’s name to Azura Memory Care or The Gary Sinise Foundation, which supports wounded warriors. The family would like to give a special thanks to Dr. Rudisill, and to all the staff at Azura Memory Care for their loving care of Ralph during these last few months, and to Agrace Hospice for their wonderful care during his final days. We would also like to thank Rosman, Uehling, and Kinzer for their assistance.

Ralph Alba, age 90, of Beloit, WI, died on Sunday, November 1, 2020, at Azura Memory Care. Ralph was born on August 27, 1930, in Caledonia, IL, the son of Refugio and Soledad (Reyes) Alba. He grew up in Beloit, WI, and graduated from Beloit... View Obituary & Service Information

The family of Ralph Alba created this Life Tributes page to make it easy to share your memories.

Send flowers to the Alba family.