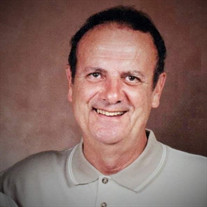 Theodore "Ted" Joseph Balk, 82, of South Beloit, Illinois, passed away, Sunday, June 17, 2018 at his home. A celebration of life service will be held at 12:00 p.m., Sunday, June 24 at Faith Lutheran Church, 1305 Blackhawk Blvd., South Beloit, Illinois, 61080. Pastor Rick Meier will be officiating. A luncheon at the American Legion, 14879 Dorr Road, South Beloit, Illinois, 61080 will begin following the service. Memorials may be made to Beloit Hospice or Northern Illinois Hospice. Those wishing to sign Ted's guestbook may do so at rukfuneralhome.com Theodore was born February 1, 1936 in Prairie du Chien, Wisconsin to Joseph and Kathryn (Emmons) Balk. He enlisted in the United States Army in 1958. While serving abroad in Germany, he met his future wife Irene (Weidemann). The two were married October 11, 1960 in Chicago, Illinois. Theodore was employed as a maintenance worker for Harper College and Palatine High School where he retired in 1994. He also worked as a part time professional musician in the Chicago area. Music was a passion which started early in his life and continued throughout as he entertained family, friends and strangers, playing any one of the multiple instruments he learned. He also enjoyed many impromptu trips with his family, taking adventures through most of the states, Canada and Germany. Theodore is survived by his wife Irene of 57 years, son Garrick (Angela) Balk, daughter Christina Balk, grandchildren Kathryn and Nicholas Balk and brother Thomas Balk. He was preceded in death by his son Gregory Joseph Balk in 2014, parents Joseph and Kathryn, brothers, Robert and William Balk, and sister Joan Balk. Rosman, Uehling, Kinzer Funeral Home and Crematorium is privileged to serve the Balk family.

The family of Theodore "Ted" Balk created this Life Tributes page to make it easy to share your memories.

Send flowers to the Balk family.