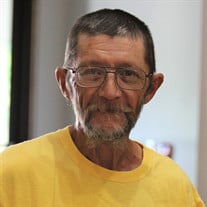 Thomas Eugene Kemp, 64, left this world on Monday, June 10th 2019. Born in Harvard, IL to Paul and Anna “Paulene” Kemp. He spent his childhood in the Delevan/Elkhorn area. During his adult years he lived in several places, but called Crandon, WI his home during many of them. For the last decade he has called Clinton his home. During the years he worked on a mink farm, as a foreman building pole-barns, refinished furniture, was an autobody mechanic, and most recently a metal scrapper. He loved to hunt, fish, work with his hands build furniture, draw, garden, help people, and spend time with family and friends. He was honest, trustworthy, friendly, a hard worker, constantly moving, and loved to joke around. He had a wealth of random and useful knowledge, as well as stories as far back as his childhood and if you were willing, he’d be happy to share it all with you. He leaves behind his wife Marcene Kemp (Hartley) his children Misty (Brian) Gray, Ami Kemp Gestrich, Jacintta, Kayde (Brent) Johnson, and Kelly. His grandchildren Tyler and Lexy (Gerald) Guerrero and great-grandchild Myla Guerrero. As well as his furry four-footed son, Singer. His cousins Al, Mike, and Darla who were like siblings to him and Steve his longtime childhood friend. As well as many more family, friends, and associates. He will be greatly missed by family and friends alike. Proceeded in death by his parents Paul and Anna “Paulene” and his siblings Shirly, Sandy, Donny, James “Jim, “and Rodney “Ricky.” His “Celebration of Life” will take place at Herb Reffue Park, on top of the hill, in Clinton, WI, on Saturday, July 13th from 12pm to 5pm. We will be having a picnic, playing games, and sharing stories. Feel free to bring a side dish, pictures of Tom, and memories to share.

Thomas Eugene Kemp, 64, left this world on Monday, June 10th 2019. Born in Harvard, IL to Paul and Anna &#8220;Paulene&#8221; Kemp. He spent his childhood in the Delevan/Elkhorn area. During his adult years he lived in several places, but called... View Obituary & Service Information

The family of Thomas Kemp created this Life Tributes page to make it easy to share your memories.

Send flowers to the Kemp family.