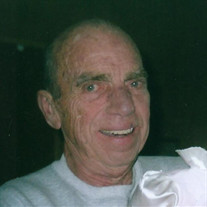 William John “Bill) Stephens was born in Beloit, WI on January 28, 1935 to William P. Stephens and Emily (Pritchett) Stephens. He passed away on September 21, 2018 at the age of 83. He worked at Freeman Shoe for 40 years, retiring in 1991 to live in Westfield, WI. While there, he worked for a time as custodian at Coloma Elementary School. He is survived by his wife of 65 years, Janet (Bevan) Stephens; a son, David Stephens of Janesville; two daughters, Katherine Dewey of Janesville and Julie Ford of Orfordville; a sister, Pamela Stephens of Beloit and a brother, Douglas Stephens of Wautoma. He leaves 16 grandchildren, 30 great grandchildren and 2 great great grandchildren. William was preceded in death by his parents, his son, William Owen Stephens sisters, Bertha (sis) Jordan of Beloit, Sarah Williams of Beloit and June Dwars of Lac du Flambeau, WI; a grand daughter, Emma Stephens and a grandson, Jamieson Stephens of Westfield, WI. A day of remembrance will be held at the Rosman Funeral Home, 1125 Cranston Road in Beloit on Friday, October 5, 2018 from 1:00 PM to 4:00 PM.

The family of William John Stephens created this Life Tributes page to make it easy to share your memories.

Send flowers to the Stephens family.