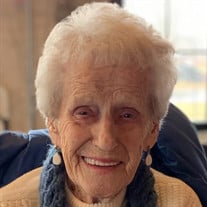 Clara Marie (Miller) Nottestad, age 99 went peacefully to her heavenly home with her family by her side. She was born on November 13, 1921, the daughter of Bernard and Rhoda on a farm near Wonewoc, WI. The family moved to Rockton, WI where she graduated from Ontario HS in 1940. She married Albin Benson and they later divorced. She married Arthur Nottestad and they lived near Rockton until 1966 when they moved to LaCrosse. She worked at K-Mart until 1979 when they moved to Beloit to be closer to their children. She worked at Beloit K-Mart until her retirement. She was a lady of many talents, but her real joy was her garden and her flowers. Never a weed could be found in them. Her green thumb made her yard beautiful. She enjoyed so many activities including, bowling, playing cards often, occasional gambling trips, especially dancing and attending church functions. She loved spending time with her loving family. She found strength in her faith and was a member of Our Saviors Lutheran Church, Rebekah Circle and sewing bee. She enjoyed many good times at the Janesville Senior Center. She lived a full and active life. She is survived by her daughter, Marjorie (Benson) Harris, her son, Lenard (Carolyn Copus) Nottestad. Grandchildren, Mark Harris, Todd (Lisa) Harris, Chris (Candy) Harris, Shawn Harris, Amy (Jason) Walker, Jill (Brent) Rasmussen, Jason (Sara) Nottestad, and Darla Schaal. Great Grandchildren, Shane, Michael (Courtney), Morgan (Josh), Callissa (Jon), Jordan (Kim), Collin, Mackenzie, Kaden, ReyAnn, Sydnee, Jacey, Cheyanne, Joe, Ben, Alex, and Kory. Great Great Grandchildren, Ashton, Alaina, William, Charlotte, Blake, Max, and two on the way. Extended family, Gene (Jan) Samuelson, Jerry (Linda) Samuelson, Susie (John) Hanlon, Rhonda, Shelly, Laura, Colleen, and their families. Her sister, Joyce Ruetten, brother, Gordon (Shelly) Miller, and numerous nieces and nephews. She is preceded in death by her parents, husbands, 5 brothers, 4 sisters, son in law, Paul Harris, granddaughter in law, Pamela Harris, great grandson, Evan Harris, stepsons Arvin and Lynn Nottestad, and very special friend and companion, Harold (Sam) Samuelson. Her family would like to thank Beloit Regional Hospice, The Suites, Wendy and Malcolm Reed and all the caretakers in her life. A memorial service will be held at 11:00 a.m. on Saturday, May 15, 2021 at Our Savior's Lutheran Church, 749 Bluff Street in Beloit.  In lieu of flowers, please pay it forward with a kind deed or gesture. Memorials may be made to Our Savior’s Lutheran Church Sewing Bee.  Rosman Funeral Home assisted the family.  To express online condolences, please visit: www.rosmanfuneralhome.com.  364-4477

Clara Marie (Miller) Nottestad, age 99 went peacefully to her heavenly home with her family by her side. She was born on November 13, 1921, the daughter of Bernard and Rhoda on a farm near Wonewoc, WI. The family moved to Rockton, WI where... View Obituary & Service Information

The family of Clara M. Nottestad created this Life Tributes page to make it easy to share your memories.

Send flowers to the Nottestad family.