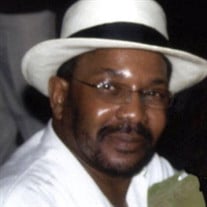 Eugene (E.U., Brother D) Relerford, of Beloit Wisconsin, departed this life, Wednesday, August 7, 2019, at U.W. Madison Hospital Surrounded by his family. He was born on January 25, 1952, in Hot Spring, Arkansas to proud parents, James and Ruthie (Frazier) Relerford. He graduated from Beloit Catholic High School. Eugene married Linda Givhan on April 25, 1971; to this union, one daughter was born Sondra. Some years later beyond their separation. Eugene met his long life partner Patricia Hodges. Through their uniting they raised five children: Shauna, Sheric, Shelton, Shaloan, and Meaghan. Eugene a lifelong Beloit resident was an entrepreneur that loved his family and community. His mission in life was to bring about knowledge and change while providing entertainment to all. He opened the Starship night club one of the first African American owned in Beloit, Wisconsin in the 1980’s. His vision did not stop there. Eugene was the first African American to found and publish a weekly newspaper. Eugene was the founder, owner, and publisher of The Chronicle weekly newspaper. A publication serving Beloit, and Janesville, WI and Rockford, IL. He started the Stateline area’s only “Blue Chip” community newspaper in 1981; with the motto “Journalistic Excellence, Service, Integrity and Objectivity Always.” The Chronicle offers articles on general items and political developments of interest in Wisconsin minorities, and places emphasis on African American families in the community. He loved photography, being a part of community events and giving back. Eugene was always present at events in the community making sure events received exposure and leaders were acknowledged for their contributions. Eugene was a historian, role model, and all around “good’ guy. If he wasn’t at a community event Eugene loved spending time with his grandkids. He was truly loved by all. Eugene leaves to cherish many memories; his son, Shelton Hodges of Beloit, WI; three daughters, Sondra Dionne (Michael) Verser of Orlando, Florida; Shauna M.(Daryl) Hodges, of Kenosha, WI; Shaloan L. (Willie) Hamilton of Antioch, IL; and nine grandchildren. One brother Earnie Relerford of Baltimore, MD; and five sisters, Doris Pleasant and Barbara Cross of Beloit, WI; Jackie Butts and Alice Mosely of Milwaukee, WI; and Bernita (Roy) Boton of Arlington, TX and a host of nieces, newphews and close friends. To know Eugene was to love him. He is preceded in death by his parents, James and Ruthie Relerford, two uncles, Willie James Frazier sr. and Billy Joe Frazier, one Aunt, Fay Sylvia Frazier, and brother, James Eduard Relerford. Memorial Service will be held on Monday, August 19, 2019, at Beloit Life Church, 2170 Murphy Woods Drive in Beloit, Wisconsin. Visitation will take place from 9am-11am, followed by funeral service at 11am. Pastor Sherrick Anderson will be officiating. Committal in East lawn Cemetery in Beloit will follow the service. Repast at The Rotary Center, 1160 S. Riverside Drive in Beloit.

The family of Eugene Relerford created this Life Tributes page to make it easy to share your memories.

Send flowers to the Relerford family.