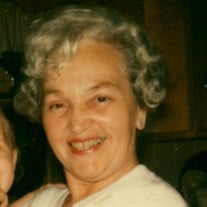 Freeland, WA/Beloit, WI – Mrs. Jadwiga A. (Chabierska) Shauck, age 93, of Beloit and Freeland, WA, passed away on Thursday, January 14, 2016 at Providence Hospital in Everett, WA. She was born on September 14, 1922 in Lodz Poland to Ignacy and Anna (Walcrak) Chabierska. Mrs. Shauck spent WWII working as a forced laborer on a German farm. After the war she immigrated to the United States and married Jarrett Shauck, Jr. Mrs. Shauck was a homemaker. She is survived by two daughters-in-law, Maureen and Anna; three grandchildren, Jennifer (Kelly) High of Waxahachie, TX, Nadia Jones of Mukilteo, WA and Amanda Shauck of Lynnwood, WA and 5 great grandchildren. She was preceded in death by her husband, Jarrett, their two sons, Jarrett and Jeff and one grandson, Gregg Shauck. A memorial visitation will be held at the Rosman Funeral Home, 1125 E. Cranston Road in Beloit on Tuesday, July 10, 2018 from 11 AM until 12 PM Noon. Burial will conclude at 2 PM at Oakwood Cemetery.

The family of Jadwiga A. Shauck created this Life Tributes page to make it easy to share your memories.

Send flowers to the Shauck family.