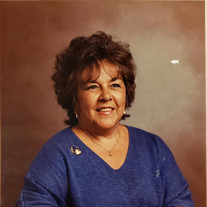 Beloit, WI - Janet Arlene Thompson, 81, passed away Saturday, November 20, 2021 surrounded by loved ones. Born February 18, 1940, in Viroqua, WI, Janet was the youngest of 12 children born to Allen Wesley and Edna Lela (Mason) Sidie. She married James Thompson in 1956 in Beloit, WI. They started a family and had five children. She and Jim divorced in 1973, but have remained close family friends. Janet worked as a waitress and hostess at the Wagon Wheel Lodge in Rockton, IL, for 28 years, until the permanent closing of the Lodge in the early 90s. She played a huge role in raising her grandchildren, providing daycare for them. Janet loved spending time with her family. She loved to talk on the phone to friends and family for hours. She loved animals and always had dogs and cats to keep her company; Pal, Jimmer, "Punks," Cindy, Patty Sue, Friend, Crisco, Kisca, and Sunny. Janet’s favorite food was her son John's "Famous Chicken," and while sick in the hospital, she told us that she could not wait to get home to have some of that “Famous Chicken.” Janet is survived by her children, James "Bud" (Terri) Thompson, Jeannie (Billy Stimpson) Thompson, and John (Chris Silvis) Thompson; grandchildren Chris Thompson, Danielle (Scott Dau) Addington, Rickie Thompson, Jessica (Jonny Mack) Thompson, Jonathan (Nina) Thompson, Christopher (Sara) King, and Marcus (Maggie) King; 12 great-grandchildren, and one on the way; and many nieces and nephews whom were very special to her. They grew up like sisters and brothers since they were all so close in age. She was preceded in death by her parents, Allen and Lela; three brothers, Leland “Dick,” Chancy and Gordon; eight sisters, Buelah, in infancy, Martha Johnson, Lavina De Lacy, Edna Carlen, Cleo Dunwald, Joyce Agee, Myrtle Partlow, and Lillian Geary; the love of her life Bob Hale, a son Bobby Thompson at birth, and her youngest son Jeffrey Thompson. In lieu of a traditional service, a celebration of life for friends and family will be held at the South Beloit Businessmen’s Association, 525 Washington St., South Beloit, Saturday December 4, 2021 at 3pm. Food will be provided.

The family of Janet Arlene Thompson created this Life Tributes page to make it easy to share your memories.

Send flowers to the Thompson family.