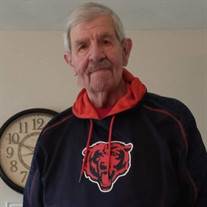 Not sure what to send?

John “Jack” Robert Kennedy, lost his brave fight with cancer on January 23, 2022. Jack was born June 12, 1945 to John F. and Alice M. (Burdick) Kennedy in West Allis, Wisconsin. He attended Beloit schools and graduated from Beloit Memorial High in 1963. Jack was a carpet rep for most of his career. Later in life, he joined Marling Lumber Co. for several years. Jack loved music, the Chicago Bears and Cubs, model airplanes and most of all, his family. Jack is survived by his wife of 49 years, Jan (Manthe) Kennedy; daughter, Chris (Wes) Thomas; sons, Paul (Kelly) and John. He is further survived by his grand kids, the joy of his life, Aaron (Deniz) Whittier, Quinn Whittier, Lydia and Bobby Esterbrook and Jacqueline Kennedy as well as a niece, Laura Drath and nephew, Jeffrey Gunning. Jack was preceded in death by his parents, his sister Geraldine Gunning, his brother in- law Mike Manthe and his mother and father in- law Joan and Harold Blossom. A Memorial Service and Celebration of Life will be on his birthday, Sunday, June 12, 2022 at 12:30 p.m. at Eastlawn Cemetery, where Jack will be interred with is father. I will love you 4/ever Jack. -Jan

The family of John "Jack" Robert Kennedy created this Life Tributes page to make it easy to share your memories.