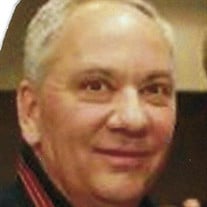 Beloit, WI - John Thalman, age 67, of Beloit, WI, passed away on October 8th at Beloit Memorial Hospital. John was born on December 15th, 1953 in Beloit, Wisconsin, where he spent most of his life. His parents were Ramona and John Thalman. John was known for being a man of laughter, being light-hearted, and loving his family. John made sure that people around him were laughing and having the best time possible. Music and sports were very important to John. He spent his days sitting on his back deck, listening to chicago blues and The Allman Brother Band. If you drove past his house, you probably heard the song "Whippin' Post", or the "Super Bowl Shuffle". There was not a more dedicated Chicago Bears fan. He never missed a Chicago Bears or a Chicago Bulls playoff game. He was lucky enough to meet Michael Jordan during his rookie year while they had an exhibition at the Beloit College. He even got his picture taken with him. John was an amazing father and husband. He was at every sporting event for his son, Dustin. If it was bowling, baseball, football, or basketball, he made sure to be there. He was an assistant coach for Dustin's baseball team, and traveled all over the state to watch him play. He was also a supporting husband who worked extremely hard to give his family everything they needed and more. John always made the people around him laugh. He had great one-liners, jokes that he heard while at work, or he may have repeated some old Rodney Dangerfield jokes. It was hard not to laugh in his presence, and appreciate his witty humor. John is survived by his loving wife Elana Thalman of 41 years, and his son Dustin Thalman, and his siblings Terry (Donna) Thalman and Connie (Steve) Truesdale. The city of Beloit, and his family will not be the same without him being here. John's visitation will be at Rosman Uehling Kinzer Funeral Home on October 30th, from 1-3PM. Please come to share your stories, and your love to the family and friends of John Thalman. In lieu of flowers, memorials can be directed to the family in John’s memory. A memorial visitation will be held on Saturday, October 30, 2021 from 1:00 PM to 3:00 PM at the Rosman Funeral Home, 1125 E. Cranston Road in Beloit. www.rosmanfuneralhome.com 608-364-4477

Beloit, WI - John Thalman, age 67, of Beloit, WI, passed away on October 8th at Beloit Memorial Hospital. John was born on December 15th, 1953 in Beloit, Wisconsin, where he spent most of his life. His parents were Ramona and John Thalman.... View Obituary & Service Information

The family of John Frederick Thalman created this Life Tributes page to make it easy to share your memories.

Send flowers to the Thalman family.