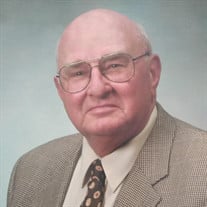 Lawrence D. Hines, 88, of Beloit passed away Tuesday, December 7, 2021. Born at home on January 26, 1933 in Anderson, Indiana, son of Robert and Ree Rodecap Hines. Larry graduated from Purdue University in 1955 with a degree in Bachelor of Science in Aeronautical Engineering. He married Caryl Elizabeth Kuehn in Shorewood, Wisconsin on August 25, 1956. Larry was employed by Northrop Corporation in Hawthorne, California; Corning Glass Works in Bradford, Pennsylvania and in Martinsburg, West Virginia; Beloit Corporation; Beloit Computer Center and for 19 years at Ingersoll Milling Machine Company in Rockford retiring in 1998. He worked with large computers for over 35 years as a programmer-analyst, holding management positions for much of that time. He helped install the country’s first intercontinental missile base in Presque Isle, Maine. He worked on two occasions in 1956 at Cape Canaveral testing the country’s first intercontinental missile. Larry was very active in the First Congregational Church, serving as moderator for two terms, chair of the building committee for the church built in 2000, business manager for 10 years and chair of the Board of Trustees several times. Larry was active for over 25 years in the Data Processing Management Association, Madison Chapter, and serving in a variety of offices. Then he was active in CASA, a special interest group and part of the Society of Manufacturing Engineers, serving in many capacities. He served eight years on the library board, two as president. During that term in 1982 the group, with the consent of the City Council, was changed from the Library Advisory Committee to the Beloit Library Board of Trustees. He suggested the name, which was later adopted, Friends at Beloit Library (FABL) for the friends group. An avid golfer, Larry fought the game for over sixty years. He became active and served on the board of Society for Learning Unlimited (SLU), which is affiliated with Beloit College and Elderhostel. Larry leaves behind a daughter, Amy Elizabeth Maier (Jeffrey) of Delafield, Wisconsin; a son, Andrew Lawrence Hines (Kimberly) of the Village of Lakewood, Illinois; five grandchildren, Ryan Hines (Brittney), Connor Hines, Kierra Hines, Alex Maier, and Lauren Maier and great-grandchildren, Payson and Haelynn. His parents, brothers, Donald and Richard and ex-wife, Caryl predeceased him. Visitation will be from 10:30 a.m. until 11:30 a.m. on Wednesday, December 22, 2021 at First Congregational Church, 801 Bushnell Street, Beloit, with a short service to follow at 11:30 a.m. In lieu of flowers, memorials may be made to First Congregational Church. Rosman Funeral Home assisted the family. To express online condolences, please visit: www.rosmanfuneralhome.com. 364-4477

Lawrence D. Hines, 88, of Beloit passed away Tuesday, December 7, 2021. Born at home on January 26, 1933 in Anderson, Indiana, son of Robert and Ree Rodecap Hines. Larry graduated from Purdue University in 1955 with a degree in Bachelor of... View Obituary & Service Information

The family of Lawrence D. Hines created this Life Tributes page to make it easy to share your memories.

Send flowers to the Hines family.