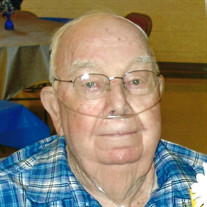 Beloit – Marvin M. Bakka, age 91, died from C.O.P.D on July 18, 2018 while at his home. Marvin was born on May 12, 1927 in Beloit, the son of Holger and Randi (Vorvick), the youngest child of seven. Marvin married Eleanore Swanson on October 30, 1954 at Our Saviors Lutheran Church in Beloit and together they had two children. Eleanore died on July 19, 2001 in Beloit. Marvin served his country in the US Army during WWII and was drafted in 1945 and served in the European Theater. Marvin was discharged in 1947 with the rank of Sergeant. Marvin was a life member of the Beloit VFW Post 2306. Marvin was a member of the Shopiere Congregational Church. Marvin entered the work force after his military service and worked on a farm at $1.00 per day and other various jobs at $.50 per hour and over the years the jobs and the pay improved. Marvin later worked at Fisher Body (GM), then Durst in Shopiere for 12 years from 1951-1963 and later retired from United Industries in 1989 after 26 years of service. Marvin enjoyed being a machinist and enjoyed repairing tractors, cars, toys and even VW’s. Marvin was a member of the Shopiere Congregational Church. One of Marvin’s hobbies was genealogy and he traced his ancestry back to the Vikings. Marvin also made 3 trips to Norway to visit his relatives. Marvin was survived by his 2 children, Susanne (Alan) Jacobson of Beloit and Kevin (Margaret) Bakka of Ft. Collins, CO; his companion of 17 years, Joyce Beals; 5 grandchildren, Timothy Krueger, Kyle Krueger of Janesville, Megan (Josh) Spiegel, Paul (Brittney) Bakka and Laura (Andy) Abbott; 3 great grandchildren, AdiLynn Spiegel, Malachi Spiegel, Brynleigh Spiegel, McKinley Abbott and Elliot Abbott and many nieces, nephews and other relatives. Marvin was preceded in death by his parents, his wife, Eleanore in 2001 and 3 brothers and 3 sisters. Memorial donations can be directed to Beloit Regional Hospice in his memory. Funeral services will be held at the Rosman Funeral Home, 1125 Cranston Road, Beloit on Monday, July 23, 2018 at 11:00 AM. A visitation will be held at the funeral home on Sunday, July 22, 2018 from 1:00 PM to 3:00 PM and also on Monday from 10:00 AM until the time of service. Graveside service and military honors will take place on at 11:00 a.m. on Monday, June 28, 2021 at Shopiere Cemetery.

The family of Marvin Magnus Bakka created this Life Tributes page to make it easy to share your memories.

Send flowers to the Bakka family.