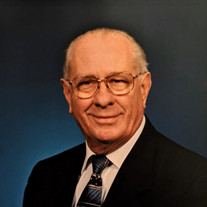 Richard Dean “Dick” Case Richard Dean “Dick” Case, 93, of Beloit died Saturday, October 24, at Lake Hallie Memory Care in Chippewa Falls, Wisconsin. He was born October 25, 1926 in Beloit, the son of Howard and Blanche (Hollister) Case. He married Ruth Riley on July 25, 1948 in Beloit. They were married until her death on July 4, 1988. He married Francine McCartney on June 7, 1991 in Janesville. Dick graduated from Beloit High School in 1945. He was a World War II Veteran, serving in the Navy from 1945-1946. Following his service he was employed by Fairbanks Morse & Co. for 42 years as a machinist, retiring in 1989. He was active in the Boy Scouts for over 50 years as a leader and scout master, receiving many scouting awards, including the Silver Beaver, Good Shepherd, and a Lifetime Achievement award. He was a member of the Fairbanks Morse & Co. Quarter Century Club, the Loyal Order of the Moose 191, The American Legion and the United Church of Beloit. In his retirement he enjoyed spending time with his family, camping and traveling, and spending winter months in Arizona. Dick is survived by Francine Case of Cottage Grove, MN; step-daughter Marcene (Bruce) Pylkas of Cottage Grove, MN; step-son David McCartney of Saudi Arabia; grandchildren Timothy (Jasmine) Case of Eau Claire, WI, Philip (Courtney) Case of Kansas City, MO, and Christopher Case of Lajitas, TX; step-grandchildren Carl Pylkas of Hudson, WI, and Trisha Pylkas of Reno, NV; great-granddaughter, Evelyn Case, of Eau Claire, WI; and several nieces and nephews. He was preceded in death by his parents, his wife Ruth, five brothers, one sister, and his sons, Steven and Gary. A private service will be held at the Rosman Funeral Home. Burial rites will be accorded and he will be buried at East Lawn Cemetery in Beloit. The family asks that memorials be directed to United Church of Beloit, 657 Bluff St, Beloit, WI 53511. www.rosmanfuneralhome.com 608-364-4477

The family of Richard Dean Case created this Life Tributes page to make it easy to share your memories.

Send flowers to the Case family.