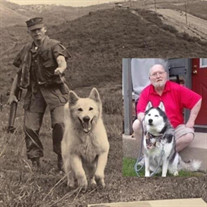 William Joseph Johnson was born on 10/16/1947 in Chicago Ill, the son of Burton Johnson and Dorothy Dalton. Reassigned to Guard the Gates of Heaven on 04/03/2021 10:43pm until relieved by the next Marine. He Enlisted in the United States Marine... View Obituary & Service Information

The family of William Joseph Johnson created this Life Tributes page to make it easy to share your memories.

Send flowers to the Johnson family.